Hot Femme, coming to a theater near you

The New York City Fringe Festival features almost two hundred different plays each August and showcases them at various theaters around the city. The plays are a great way to appreciate the glut of amazing talent that surrounds us. As well as explore new neighborhoods to get wastey-pants in, but I digress.

The two plays I went to this week were both queer themed (what a surprise!) The first one I want to talk about is “June and Nancy.” In this play, June, a 1950’s housewife and aspiring artist is stuck in a rut. She doesn’t want the “Happily Ever After” that other women her age want and she starts drinking as a way of coping. One day, she runs into the recently unemployed Nancy, a career woman who is struggling with sexism in the workplace in a time before “sexism” was even considered a problem. 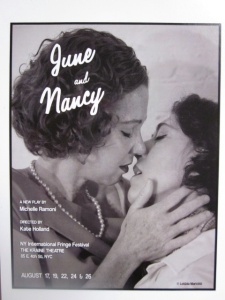 To summarize the plot in this way, doesn’t do it justice. This play is more than the sum of it’s parts. It’s an exploration of fear and hope and the ways in which they can drive us to fulfill our desires or construct prisons of our own making. Michelle Ramoni plays the titular June, and she also is the playwright of this piece. She throws herself headlong into her world. She believes in this alternate plane of reality in a way that is infectious. She writes June and Nancy’s love story in a way that feels true. It will remind you of every time you have ever fallen in love. The surprise of the shared interests and passions are new and exciting for both Nancy and June and the audience. Gabrielle Maisels plays Nancy and she has incredible chemistry with Ramoni. One can tell Maisels is a seasoned actress in the way each of her movements is perfectly timed and measured, even when assisting in changing the scenery in between acts. She’s a joy to watch. Plus she takes her top off and as Nancy exclaims, her “breasts are perfect.”

The supporting cast, Jeffery Coyne as June’s husband and Peter Daniel Straus as Nancy’s BFF flesh out the cast. One gets the sense that the entire cast studied 50’s films in order to infuse their characters with the appropriate mannerisms of the time. If you only see one Fringe play, I would make this this one. I laughed, I cried and then went home and cried some more. Go to http://juneandnancy.com/ for showtimes and tickets.

I also saw “Hadrian’s Wall,” a play about an archeologist who has let her professional life crumble when she is investigated for stealing an important artifact from a potential digging site. Ramona is a shut-in, whose only contact with the outside world is a married ex-boyfriend, who is her best friend and also defending her in the investigation. Ramona’s life is turned upside down when a sexy grad student, Amy, delivers her library books and awakens her passion for archeology and hot, hot lesbian sex.

This play is at it’s best when it’s deep. When it delves into the motivations behind exes who stay friends and when it explores the depths of love scorned and the jealousy and destruction that it can wreck. It is also funny and sexy, with Rebecca White as Amy providing the dykey cheesecake. It’s also great to see a play that has a lesbian relationship, without being a traditional “coming out story.” I love a good coming out story, but it’s also nice to see queer women in stories that are about finding fulfillment outside of coming out. Like Hadrian’s Wall on Facebook to find out more about the cast and crew, as well as showtimes and tickets.

I’m shocked by how much I enjoyed both plays, especially since I’m not a big fan of sitting still and being quiet for an hour and a half. But I’ve been reminded that there are still artists with messages that are worth listening to. Do yourself a favor and don’t waste your time and 20$ to go see another canned Hollywood remake. Go to the Fringe Festival and enjoy the sharp, imaginative writing and talented, non-botoxed, actors. There’s about a week of Fringe left, don’t let August pass without getting to at least one: http://www.fringenyc.org/