Katniss...why are the odds never in your favor? WHY?

Like most 28 year old women, I spent most of this weekend curled up in bed, reading Mockingjay, the last book in The Hunger Games series whilst quietly sobbing.

But I did get out of the house long enough to go see Blogologues: Younger Than Springtime. The production, which you know if you read my interview with Jessica Schnall, the quirky lezzie blogger behind Alone…With Cats, features online content performed on stage as skits. It’s the kind of idea where you’re all like “why didn’t I think of that?” I totally wish I had because the show was awesome! 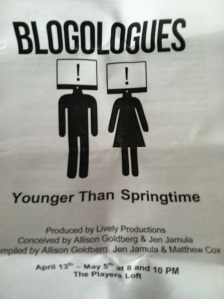 Awesome enough for me to allocate space for the program in my tiny Friday night party clutch. You know that's serious.

Taking funny online content and presenting it to an audience works because it takes the internet from a solitary place to a social place. Humans are social beings and humor is a social construct, so it makes perfect sense to take crazy Texts From Last Night and ridiculous tweets and read them to a room full of people. Somehow, it makes the experience more satisfying. Blogologues is able to crack up the entire audience just by projecting an imagine from F U, Autocorrect onto the screen.

It also helps to have a talented, energetic cast. The show starts Allison Goldberg, Jen Jamula, Dave Thomas Brown, Matthew Cox and Wendy Joy. I was particularly impressed with Goldberg, who managed to act out an entire blog post while running in place. Goldberg and Jamula conceived Blogologues and compiled the various featured online content with Cox. The variation of the tone and style of the blog posts is good for people with short attention spans ::cough cough:: I also liked that they included a gay lady blog and a piece on Ryan Gosling from Jezebel. Hellz yeah laydeez content.

It’s also pretty family friendly. Like, if you want to take your parents to the 8pm show and explain the internet to them through Blogologues you could. (Um, just make sure you’re cool with sitting next to them while someone sings a song about fucking outdoors) Or take a date to the 10 pm show. Blogologues runs until May 5th, so New Yorkers get on it. Click here for more info!

Now for something a little different. Hot Femme also writes for BGAlife.com, from a more journalistic angle. I loved this interview so it’s going on Hot Femme. I hope you enjoy!
Blogs: They’re not just for the internet anymore, bitches. Lively Productions is bringing their latest project to the stage in NYC, Blogologues: Younger Than Springtime. Blogologues was conceived by Allison Goldberg and Jen Jamula. They take popular online content verbatim, from sites such as Jezebel, Craigslist, Texts from Last Night, Damn You AutoCorrect, Overheard in New York, and launche it IRL.

Jessica of "Alone with Cats"

Luckily for the here and queer set, they’ve decided to take one of my fav 2-d lezzie blogs off the computer screen and into real life. Alone With Cats focuses on Jessica’s life with her two feline life partners, Teva and Isabel. She writes about her love life, dating, family, and her daily misadventures.

Jessica was nice enough to answer some of my burning questions about Alone With Cats and Blogologues. Read the riveting results below!

How did you get involved with Blogologues?

I checked my email one glorious night expecting to learn more about penis enlargement products and hear back from my Nigerian princess pen pal who desperately wants to give me $40 million dollars, but instead I received an email from Lively Productions co-creative directors Allison Goldberg and Jen Jamula, asking permission to perform one of my blog posts in a new show called Blogologues. It was no promise of a foot-long dick, but still an intriguing offer. I traveled to New York City for the show, and it was awesome, but I was sure it would be a one-time thing. But they kept wanting to stage more of my writing, and shortly after collaborating with them for the third time, they invited me to join Lively Productions to help out with grant writing and PR. This is the closest I’ve ever gotten to a marriage proposal. I said “yes.”
Is it weird to watch live people on stage performing a blog entry that was meant to be read silently from a cold, dead computer screen?

It’s weird, in that the voice I hear in my head when I’m writing is my own. So to hear an actress reciting my words and to see her playing me, or a version of me, is kind of a trip. But it’s also pretty amazing to see something I’ve written being used in a way I never imagined it would be. And also, terrifying. I’m always worried that no one will laugh, or that I will single-handedly ruin the entire show. (It hasn’t happened yet, but give me time.) Then there’s the difference between reading blog comments and actually hearing a crowd’s response. Real-life laughs are much more life-affirming than LOLs.

Do they ever ask to change things or ask for your input? How much of collaboration is it?

They have in the past shortened a post for length, but otherwise, what I wrote is what you get. Part of the Blogologues shtick is that posts are performed verbatim from the internet. So it’s hands-off for me; they do all the heavy-lifting by transforming a blog post into a skit.

How long have you been blogging?

A little more than two years.

Why did you start your blog?

To impress girls. To get a book deal. Fame and fortune. You know, the usual. But also, I realized I hadn’t written anything in about five years. I’ve worked as a newspaper copy editor for most of the past decade, and although I love wielding a red pen and mercilessly judging people for their grammatical errors, I was totally neglecting my own writing. I missed it.

The title of your blog is simultaneously a play on the hetero image of a single woman and the lez obsession with cats. Was that on purpose?

Yes, definitely on purpose, but also it’s very true to my life. I’m living the stereotype. I’m alone. I have cats. The name stems from a conversation I had with a friend, who was asking for dating advice. I gave her this long spiel about following your heart and blahblahloveblah, and then there was a pause, and I said she probably shouldn’t listen to anything I say ever because, “Hello, I’m alone with cats.” I started the blog a month or two later.

Your blog is a big hit with both heteros and gays, what makes you universal?

I joke that my blog is about winning at losing, but there’s truth to that. Failure is universal. I try to find the humor in often unfunny situations, and I think that resonates with people. I write candidly about love, sex, loneliness, the pursuit of happiness. And cats. A lot of cats. Those are topics that everyone can relate to. Except, obviously, dog people. I also share plenty of dating horrors and heartbreaks, and readers don’t seem to care whether I’m being dumped by men or women, so long as it makes for a good story.

Tell me something super gay about you.

My shoes. It’s my tell. Don’t let the long hair fool you.

Tell me something I missed that I should have asked here:

You forgot to ask about my feline life partners, Teva and Isabel. They feel slighted. But you can make it up to them with treats. [Ed. Note: ZOMG I suck so hard! How could I forget about the kitties?!]

Want to catch Blogologues: Younger Than Springtime? It’s playing from April 13 and goes through May 5 at the Players Loft theatre at 115 MacDougal St. There are 8pm and 10pm shows and you can get tickets here: OvationTix or call 866-811-4111. Tickets are $18 + a free drink! If you are a New Yorker, you will not want to miss this! I know I’ll be there.